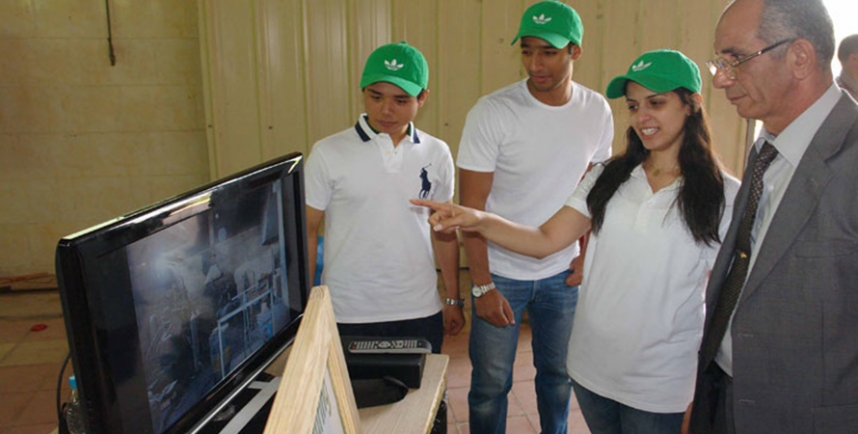 In a perfect example of how theory can be put into practice, students of the faculty of engineering held an exceptional workshop exhibit for their graduation projects. MSA University has always been keen to mix theory with practice to enhance the students' learning process.The University has invited several distinguished professors from the same field to evaluate the students' projects which represent the outcome of years of theoretical and practical studies.

Among the projects that were exhibited, was a project to transform a car that runs by gas into using electricity. The car's speed reached 70 km/hr and could be charged for 6 hours in order to function for 50 km. The project was done by students Nael Atef, Ahmed Mohamed, Mostafa Nagy and Mohamed Salah. Another project was designing a Formula race car, where the students manufactured the chassis and then assembled the whole car. The formula car project was conducted by 8 students; 4 of them designed the chassis, selected the engine and made the gear box while the other 4 students designed the brake system, the suspension, and the gear box. The car will be used to participate in an international contest in London during the coming months of August and September. Another car was designed with an auto lift in case of the need to change the tires. Another group designed a robot to perform certain tasks, such as holding secret elements in addition to approaching high risk areas that are inaccessible to humans. The group members names are: Abdel Aziz Soliman, Raed Omar and Mohamed Bakry. The professors were impressed with the exhibited projects, indicating the standard of achievement of our students, in addition to the depth of the level of technology available for their practice. The judging panel also commended the students' skills of electronic research, English language proficiency and their interaction with the ICT technologies. Dr. Nawal El Degwi, Head of the Board of Trustees, highlighted MSA University's continuous efforts to graduate exceptional students who surpass their counterparts of all other engineering faculties in Egypt, besides the excellent level of projects that have guaranteed the students exceptional job opportunities in recognition of the unmatched level of skill they have attained