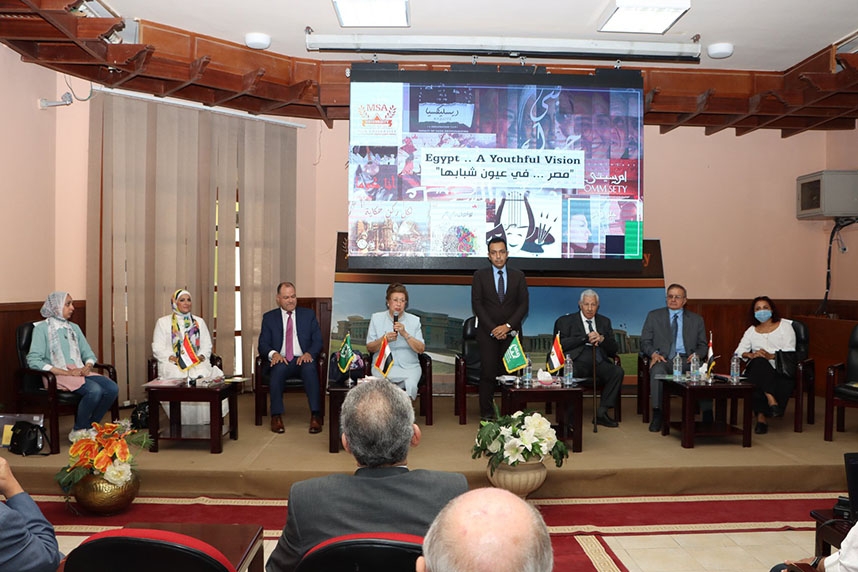 As Chris Grosser quoted “Opportunities don’t happen. You create them.”, and that was what October University for Modern Sciences and Arts - MSA University exactly did despite all circumstances because it is indeed unstopabble

With a general invitation to all media professionals, journalists, professors, students and graduates of the media faculties in all public and private Egyptian universties and to all those who are interested in Egyptian Affairs, MSA University held and managed the largest Media Symposium under the name of “Egypt...A Youthful Vision”, in the hybrid system in Egypt in the context of celebrating the distinguished media production that was presented and discussed by the final year students graduating from the Faculty of Mass Communication.

The symposium was organized and supervised by the Faculty of Mass Communication under the patronage of Mrs. Nawal El-Degwy, Chairman of the University Board of Trustees.

During the symposium activities, important topics were discussed through three main focuses which were that experts saw how media youth deal with Egyptian society issues.

In addition to the next generation and a view of the future of Media and the role of Youth and the role of studying media in forming the students’ personality. The media experts were astonished with what they saw as they were able to see how media youth think and how insightful they are without any doubts that the students of the Faculty of Mass Communication students at Modern Sciences and Arts are with special talents, capabalities and qualifications for the labor market.

This is due to the fact that MSA University is always keen to focus on the students’ creative aspects, critical thinking and productivity. And as a result, more than 4000 viewers watched and interacted with the symposium via the Internet video conference softwares and direct digital broadcasts through the university's official social media channels by the usage of the latest means and technology of communication and information.

“Egypt... A Youthful Vision” indeed have reached a huge success through the engagement and the participation of a distinguished group of media professionals, journalists, producers, directors, heads of satellite channels, media professors in Egypt, deans of colleges and members of the university's faculty.

The symposium was attended by:

Moreover, another proof that the symposium was superbly is the fact that it had a massive press coverage and wide media interest as shown in the links below: